Are you sick of the word ‘artisanal’ yet? Because I am. I should have known Modan Artisanal Ramen was going to be disappointing. 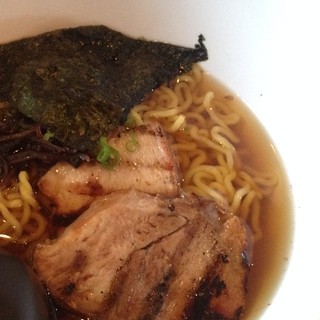 I was excited when I read about a ramen shop opening in South Pasadena, which is just a stone’s throw away from me. We already have Benten ramen, which works in a pinch if you don’t want to drive all the way to Sawtelle for Tsujita, but it’s always good to have other choices in the neighborhood. What really got me excited was that their menu said the veggie ramen was vegan!

Alas, it was not so.

When Will and I got to the restaurant a few nights later for dinner, the menu had the word ‘vegan’ crossed out. The noodles have egg in them, so the veggie ramen was just vegetarian, not vegan. For what it’s worth, the broth was decent and the agedashi tofu was a nice addition.

I was put off by the addition of truffle oil in Modan’s signature bowl of ramen, and I wasn’t in the mood for spicy, so I just went with the shoyu ramen. Apparently, I chose poorly. The broth was okay, but lacked a certain something that made it a good ramen broth. Whether it was richness or depth, the shoyu broth just didn’t taste like ramen broth. Maybe I should have just gone with the tonkatsu broth of the signature bowl, but if they’re not going to make a good shoyu ramen, why have it on the menu at all?

The noodles were nothing to write home about either, which just makes me angry. If noodles aren’t going to be vegan, then they’d better be good enough to warrant that!

The chashu also was a surprise to me. Instead of the slices of buttery soft pork I expected, I had two large slices of dry, slightly tough, grilled pork. It wasn’t tough enough that I didn’t give Robin some pieces, and I guess it was in her interest that the pork wasn’t more delicious because I would have eaten more of it myself.

Overall, Modan wasn’t good enough for me to go out of my way to return to, especially when Benten is slightly better tasting and a better value. I don’t mind paying more for ramen that’s exceptional, but in this case, it wasn’t. The first thing that caught my eye was the word “Sichuan” on this bowl-ramen’s package.  I like spicy ramens so a Sichuan one sounded right up my alley. When I continued reading and saw “Eel” flavor, my interested was piqued enough where I had to buy it to try it out.

I cooked this in a ramen pot on the stove so I could put an egg on it, but the styrofoam bowl it comes in would work just as well.

Noodles:
Nice ‘q’ despite my cooking the noodles longer than the 3-minute suggested time in boiling water.  The springiness is different than the “underdone” texture of noodles. It was almost like a konyakku springiness and lasted almost as long as it took me to finish the entire bowl.

Broth:
Salty and spicy.  I couldn’t taste any mala numbing. If I hadn’t known it was supposed to be “Sichuan” flavored, I would have just thought it was regular spicy flavored.  Initially, there was a savory fishy taste from the eel package, but once that got mixed in better, I forgot about it. There were slices of chili pepper in the seasoning package that plumped up to look almost-fresh. Spice level of soup was medium.

Eel:
Generous portion of eel pieces.  They were firm and sweet and included the crunchy eel bones.  There were some pieces that still had skin on.  The pieces tasted on par with the canned eel in sauce you’d get at Chinese supermarkets.