You are here: Home / Archives for peruvian

The dearth of upscale vegan restaurants in LA should have been a reason for me to visit Crossroads earlier, but I got put off by the distance and price.  Since we mostly go to omnivore restaurants when we want cloth-napkin food and so far, they’ve been stellar (Providence, AOC, n/naka), I didn’t want to take the risk of paying a lot for a vegan meal that was less than satisfying.  It’s funny because we both really like Tal Ronnen’s Kite Hill cheese, but not enough to try his other cooking. When I read that Ricardo Zarate was going to do a Sunday Supper at Crossroads as a guest chef, I finally decided to give it a try. I loved Mo-Chica when it was in its original location and have always wanted Will to try it. 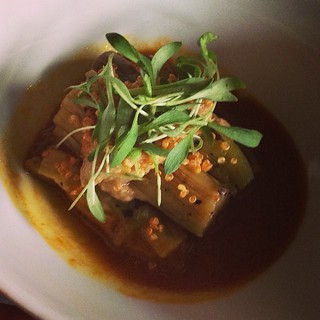 They called the first course an eggplant ceviche.  The eggplant had a wonderful charred, smokey taste and the spicy, acidic dressing did make me think of traditional ceviche. Then we had a plantain-based cake with sauce topped with what I think was a shiitake chip that tasted like bacon.  The plantain had a chewy,  dry texture that went really well with the slightly funky sauce. Next were grilled vegetables on a plate of quinoa, which sounds boring but these were probably the best grilled vegetables I’d had in a long time. They were still firm and crisp, but had a wonderful charred taste. Will and I always make fun of quinoa because it’s so good for you, but tastes so boring, but Zarate’s quinoa was wonderful. It was fluffy, flavorful, and interesting thanks to the crispy quinoa sprinkled throughout. Then came both my favorite and least favorite part of the meal. I think this was some sort of bulgur or barley stew that was so rich and creamy that I couldn’t believe it was vegan.  I could have a giant bowl of this topped with pickled onions and be happy. The bad part was the meatball topping. It clashed with the rest of the dish and tasted like an Ikea meatball or one of those soy meatballs I used to get at Trader Joe’s. I’m not one who thinks every meal should have something meaty or fake-meaty, so I would have been happy with some assertive tasting vegetable on top instead of the meatball. Dessert were these fried pieces of dough which were satisfying and chewy. They were sauced with some sort of fig reduction which while good, was a little too sweet and cloying for me.  Will had no problem jumping at the opportunity to finish my dessert for me.

I’m so glad I went to Sunday Supper when Zarate was cooking.  It was nice to finally introduce Will to his type of cooking and flavors, but now it makes me sad that we won’t have a meal like this ever again. The tangy, spicy, assertive taste of Peruvian cooking is something that we both like, but it’s so hard to find Peruvian dishes that are also vegan.

Sometimes, what you’re looking for is right in your backyard. In this case, what I was looking for was right in my parents’ backyard and had been for years.  Since the winter heat wave, I’ve been craving the refreshing acidity of good ceviche.  An internet search yielded El Pollon, a Peruvian shack a stone’s throw from where I grew up in Montebello.

I met up with my cousin and we coordinated about what to order from the menu. We both agreed that the ceviche and lomo saltado were musts.  She mentioned a seafood chowder she had when she went to Machu Picchu and we found something similar on the menu, so we ordered that as well. The ceviche mixto was a hearty serving of lime-cured fish, shrimp, squid, one mussel, and maybe some scallops.  This dish could stand alone as a meal. They even helpfully included cooked sweet potato for those who want some starch to round out a meal.  The seafood tasted fresh, the marinating liquid was tangy and salty, and the crunchy corn bits and sliced onion added a nice contrast to the dish. I loved it. The lomo saltado is probably enough to feed two people.  It comes with a healthy mound of garlicky rice to go with the soy sauce and spiced strips of beef.  In case the rice doesn’t have enough carbs, there’s also a bed of once-crisp fries on the bottom of the beef to soak up the sauce from the stir fry.  I thought this dish was fine, but I’m no lomo saltado expert. The chupe de camarones that came out really sealed to our gluttony. It was a soul-warming stew of shrimp, a poached egg, and rice.  The milk in the broth gave it a satisfying creaminess but wasn’t overly rich thanks to the spicing in it.  I could imagine downing a giant bowl of this in cold weather.

The star of the meal was definitely the ceviche, but the other dishes were tasty as well.  I’d come with a couple of friends though, because I said, the servings here tend to favor those with healthy appetites or people who are sharing.