Well, I finally made it down to Maruhide Uni Club.  When I first read about this uni-lover’s heaven, I really wanted to go, but it was just so far south that it didn’t seem worth it.  I’m here to tell you it is worth it.  I had the uni ikura salmon don and it was every bit as good as I had hoped. 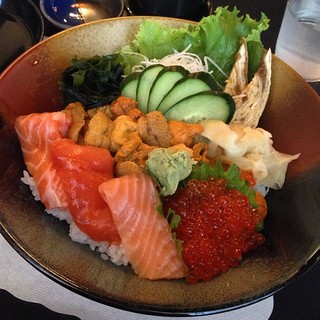 The uni was fresh, rich, salty, and tasted like the sea. I like that the restaurant provides different types of uni, which made it easier to compare tastes.  Some bites were fresh and sweet, while others had a more savory, salty note.  What surprised me was that the salmon in the bowl was also decent.  The three generous pieces had that wonderful oily, salmon texture and the perfect amount of salt.

Instead of the usual tamagoyaki, the bowl also included slices of uni tamagoyaki, which had the briny sea urchin layered within the rolled omelette.  It was the first time I had it and now I’m wondering where it’s been all my life.

The included bowl of uni soup was an enjoyable departure from the usual miso soup.  Its light, delicate taste was a foil to the unctuousness of the rest of my meal.

At $19 for this amount of uni, salmon, and salmon roe, it was a steal.

One caveat: the menu is fairly limited, which is great because then people can focus on just eating uni.  I was looking for edamame or an avocado maki for Robin and they didn’t have either. Lucky baby had to eat uni omelette, ikura, and rice for lunch.

It may be presumptuous to say I’ve tasted the best burger of 2014 and it is Bel Campo’s cheeseburger, but hey, if I end up tasting a better burger, it will be a good problem to have. 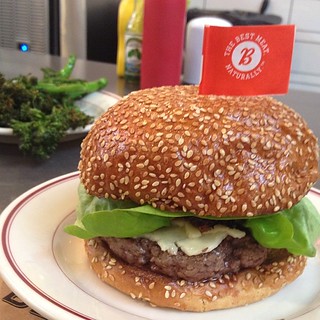 This $12.50 burger without fries was well worth it.  Happy, until humanely killed for their flesh, cows do taste better.  The patty was a loose, chopped patty that held together very well, but still managed to taste light.  The cheese enhanced rather than distracted from the beef flavor (I’m looking at you, Father’s Office blue-cheese-bomb burger).  The bun was airy but solid enough not to fall apart halfway through the burger.  The whole thing was juicy without being greasy (like an Umami burger).

In the guise of eating something more healthy, I ordered the spicy fried broccolini, which were the best broccolini I’d ever had.  The green was deep fried so the floret was crispy but the stem was still tender.  Tossed with an assertive, lemony and spicy dressing, it was the perfect foil to a perfect burger.  I didn’t even miss not having fries.

The only bad thing I can say about Bel Campo is that it makes choosing another sandwich from the menu or  anywhere else to eat in Grand Central Market very difficult.