I went back to Honey Badger Restaurant last night and ordered the niu rou mian because I was in the mood for noodle soup. What came out was a bowl of beefy, chewy noodles that surprised me in one way. 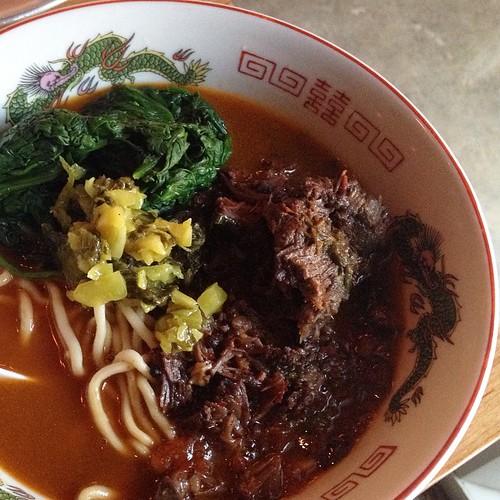 The broth was thicker than I expected, almost to the level of the thick Japanese tonkatsu broth. The house-made noodles were well coated in that thick, savory broth each time I dipped my chopsticks into the bowl for more. The flavor of the broth had more tomato than I was used to, but the tang of the tomato went well with the deeper flavor of beef.

Instead of large pieces of beef, the bowl had broken-down pieces of beef, almost of pulled-pork consistency, both tender and flavorful. The ample spinach was enough to give me massive muscles had I been in a Popeye cartoon.

Served on the side was a small cup of pickled cabbage, which I immediately dumped into the soup.

I came into Honey Badger with lowered hopes of a good bowl of niu rou mian just because I didn’t think a place that didn’t specialize in noodle soups would have good niu rou mian, but it was good enough that I would probably return for more.